AirPurifierFirst.com is a reader-supported site. As an Amazon Associate we earn from qualifying purchases. Learn more.

Night light just adds another level to its design and feel when LV-H132 is running. But this product is not just about looks; it has a three-stage filtration system that guarantees that the air will be clean. 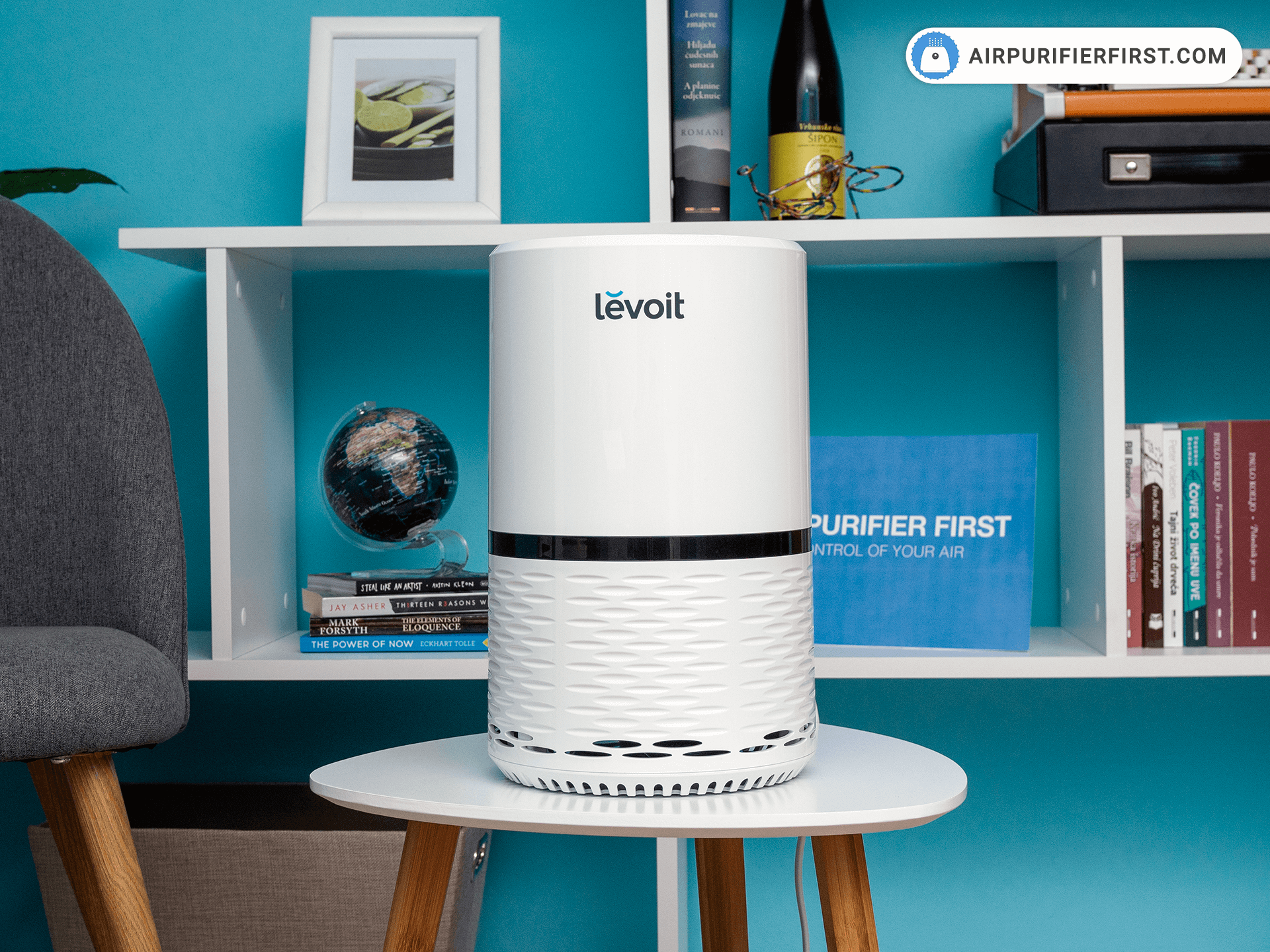 Levoit LV-H132 is designed in California, which means that this product passes all the strict California laws. Many other air purifiers just can’t be bought and used in California because of that strict laws. Levoit made sure LV-H132 meet all the standards and is safe to use.

Thanks to the ultra-silent operation, this air purifier makes only 25dB on the lowest operating level. This silent work allows you to sleep and rest without distraction, while air purifier cleans the air in the room.

The three-stage filtration method uses the HEPA filter, which is capable of removing 99,97% of airborne particles as small as 0.3 microns.

Levoit LV-H132 has memory and will remember your last settings before shutting down. This means that on the next run air purifier will start with the previously recorded settings.

The filter reset indicator is also visible on the touch panel. If it turns on, you need to check the filter and most probably replace it. To adjust fan speed, you can use fan speed touch buttons; on every click, speed level will change. The good news is that after a shutdown, Levoit-H132 will remember your last speed and will start with it on the next run.

LV-H132 is a small portable air purifier that weighs 6.61 pounds. Anyone can move it from room to room. Thanks to the compact size (8.5 x 8.5 x 14.5 inches), you can easily place it in a small room, put it on a night table, or even use it on a desk in an office. There is no problem finding a place for this lovely air purifier.

In the box, you will get one true HEPA air purifier, fine preliminary filter, an activated carbon filter attached to the true HEPA filter, and one user manual. Make sure you get all of this in an ordering box.

Before you start using Levoit LV-H132, you need to read the manual. Place air purifier on a stable surface touch buttons and night light facing up. Make sure the air filter is installed correctly and that you did everything by the book before you start it.

Levoit LV-H132 has many features. Let’s take a look at what you get for your money.

You can choose from three different speeds. The higher the speed, the greater the noise, but also the air is cleaned faster. At the lowest speed, you can sleep like a baby; the noise will not bother you since it is almost undetectable by human ears.

Filter indicator will go on as soon there is some kind of problem with the filter or if it needs replacement. As soon as you see filter indicator light, you should check the filter, and if nothing helps to make the light go away, then you should buy a new filter.

Levoit LV-H132 is a certified product and comes with precisely measured ratings. It is FCC and CARB certified, as well as ETL listed.

Levoit guarantees two years’ warranty. However, you will have Levoit lifetime support in case anything happens to your product after two years warranty expires. For contacting support, you will need to give an order ID, so make sure you don’t lose it.

This air purifier comes with a three-stage filtering system. The core of this system is the HEPA filter. Levoit air purifier doesn’t emit ozone because it is not using UV light nor the use of any anions to clean air. The filter is made in a spherical shape and is a decent size and power comparing it to the size of the air purifier. 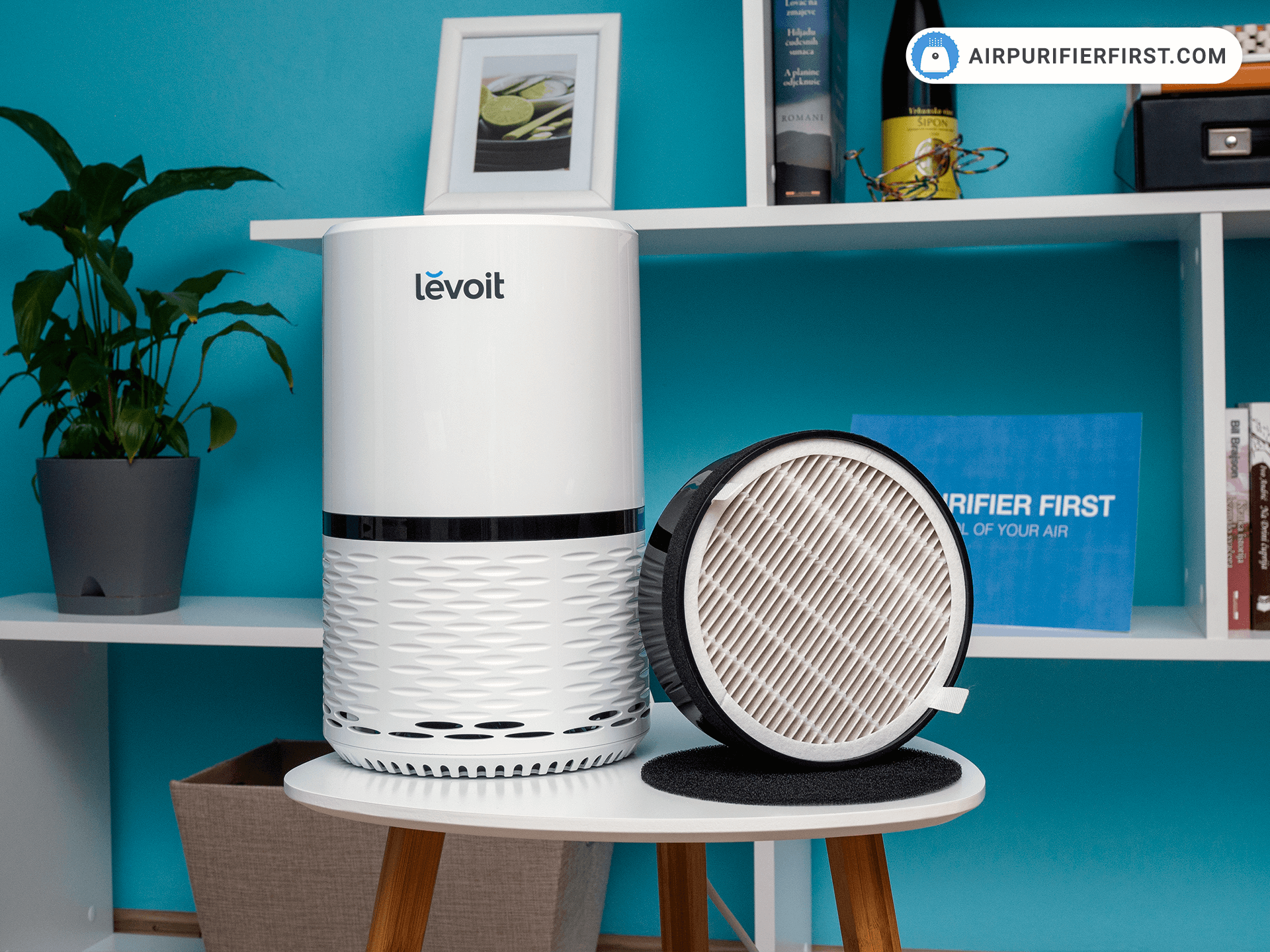 The three-stage HEPA filter is the most critical part of Levoit LV-H132. It can remove all kinds of allergens, pollen, dust, pet dander, pet hair, smoke, gas, and other unwanted airborne particles.

To reset a filter indicator, you need to tap and hold the filter reset button for three seconds.

LV-H132 is quiet as it gets. At first speed, noise is really low, and everyone should get to sleep without a problem when the air purifier is running. At second speed, people who have a strong sleep will not be bothered with an air purifier. However, on the third speed, it is not smart to sleep because noise is significant.

We have tested noise with our own equipment, which ranks noise by dBA, and the results may vary from the manufacturer result. Check our findings on the table below.

We have also tested this air purifier performance. We tested it in smaller and bigger rooms than the recommended. We tested it for 1 hour in smaller rooms while in bigger, we tested it for seven days. Obviously, results were better in a smaller room in which air purifiers cleaned the air in the shortest time. In bigger rooms, the air is cleaned but not at the rate as in a smaller room. For best results, it is wise to run it for 15 to 20 minutes at a higher speed, and after that, you can set it at a lower speed.

Remember that the test is done in real life, and there was no laboratory test on it. Check the results in the tables below.

In this room, the air quality level was improved by 87%. AQI dropped from 69 to 9, which is a fantastic result considering that this air purifier is meant for rooms up to 129 square feet.

This is a recommended size of the room for this air purifier. In this room, air quality was improved by 88%. AQI is reduced from 67 to 8. These excellent results were expected because of the excellent air purifier specifications.

In this large room, we tested the air purifier for seven days. We measured results periodically in that period. The room is the living room where people hang almost all the time. Also, this is a smoking room. We got reliable results. Results were not good as they were in smaller rooms, but overall the air purifier did a solid job. The biggest problem was cigarette smoke. When there is lots of smoke in the room air purifier had problems cleaning it. Thankfully when there is no smoker in the room, this air purifier was able to clean the room in one hour.

Best results are measured in small rooms up to 129 square feet.

Levoit LV-H132 is a small air purifier that can drastically improve the air in your home. It is ideal for a small room like a bedroom, office, or dorm. This air purifier is simple to use, and even a complete beginner can pull maximum from this device. Just after 10 minutes of running LV-H132, you will notice improved air quality, especially if you use it in a room smaller than 129 square feet. If you don’t need advanced functions that this air purifier lacks and if you are on a budget by buying Levoit LV-H132, you will not make a mistake.

Check The Latest Price On Amazon
Tweet Pin It

AirPurifierFirst.com participates in the Amazon Services LLC Associates Program, an affiliate advertising program designed to provide a means for sites to earn advertising fees by advertising and linking to Amazon.com, Amazon.co.uk and Amazon.ca.