It is best used in a bedroom or on a desktop. Since it can’t filter large spaces, it is good to place it as close to yourself, for example, on a working table. If we look at the Levoit LV-H126 price, we see that the quality of this device is satisfied.

Levoit put a HEPA filter inside LV-H126, which can remove 99.9% of airborne particles. The HEPA filter is not the only filter used in the filtration process; Levoit uses a pre-filter and an activated carbon filter.

Pre-filter is made from charcoal foam and is good at capturing large particles. The activated carbon filter removes VOCs, bad smells, kitchen odor, and other unwanted smells.

Levoit LV-H126 is a lightweight device, and because of that is a mobile air purifier which you can move easily through the house.

Below is a complete list of important specifications and features included on the Levoit LV-H126 Air Purifier:

LV-H126 has a unique design that can be substituted for a speaker. The whole device is painted in white; only the front panel is made with a light blue color. The air inlet is on the back while the air outlet is on the front. Basically, the air is pushing to the blue panel, which then disperses the fresh air on the sides. This side dispersion makes sure that if you place this device in front of your eyes, the air will not blow directly in your face.

There is no control panel or any other digital command on the device. The only control you have is speed control. The speed control wheel is below the blue front panel, and you can only change speed. By the looks of it, I can agree that the direct rival to LV-H126 is the GermGuardian AC4100. They have an identical design and similar features.

There are no advanced features on this device. You won’t find any LCD on it that may give you more information about what’s going on. The only thing you can do is turn the wheel and increase or decrease the fan’s speed.

Size matters; even though LV-H126 is a small air purifier, it is still good at air filtration. With only 4.5 lb, you can easily move it from one room to another, and if you like, you can bring it with you when you travel. Dimensions (10.5 x 6.8 x 7.9 inches) allow you easy traveling with Levoit LV-H126. With such a small size, it will perfectly fit in a small room or a bedroom.

When you receive a package from Levoit, you should get a user manual, LV-H126 Personal HEPA Air Purifier, two charcoal pre-filters, and 2-in-1 HEPA and carbon filter.

When looking for a perfect spot for LV-H126, make sure it is 15 inches away from the wall and any other objects.

I already made several Levoit air purifiers reviews, and today in this video, I will represent LV-H126. One of the first products of Levoit. Video also contains some additional information about the LV-H126, which I did not cover in this text version review.

This air purifier uses two filters to combat smells. The first one is a charcoal pre-filter, and the second is an activated carbon filter. Both filters are small because of the small air purifier size, but with this combination, these filters are capable of removing the nastiest odor at a rapid speed.

As already mentioned, this air purifier uses charcoal pre-filter, HEPA filter, and activated carbon filter. The latter two are coming as a package. In other words, once you replace the HEPA filter, you are also replacing the carbon filter. In this strong filtration system, you will be free from smoke, some viruses, pollen, allergens, dust, pet dander, and other pollutants.

With modern design and small size, this air purifier finds its spot in a room easily. You can place it on a desktop, and people will think that this is a PC speaker.

Low noise allows you to sleep undisturbed. If you place it at a first speed, the device will make noise that will not disturb you unless you need total silence for sleep. Also, the previously mentioned windshield will make sure that the air is not directly blowing in your face, disturbing people while sleeping.

I already said that the filtration system of 3-in-1 is well known in air purifiers. It is one of the best filtration methods. Without a problem, it removes cigarette and wildfire smoke, allergens such as dust and pollen. It also removes all kinds of odors, including VOCs.

However, the filter is not reusable, which means you can’t clean it; you need to replace it. Never use any oils on the filter, which some people may think to use to refresh the air.

The filter needs to be replaced every six to eight months. However, if you notice a smaller airflow, the weird smell coming from an air purifier, or a louder working, then you can replace the filter sooner.

How To Replace Levoit LV-H126 Filter

Before everything, turn off the air purifier and remove the rear cover. 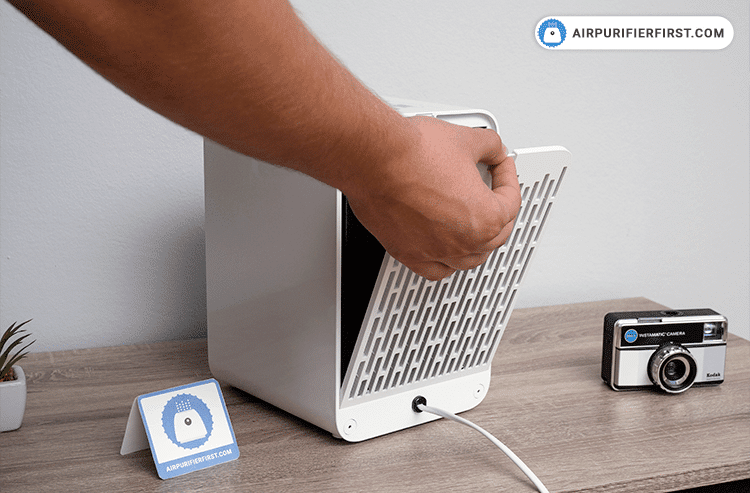 Pull the old filter out with black tabs.

It is recommended to clean the dust using a vacuum cleaner inside the air purifier. Do not use water or any other liquids. 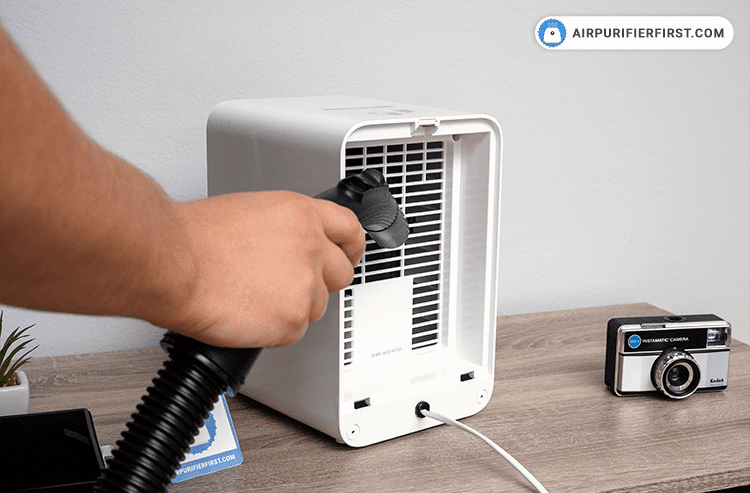 Once you take a new filter out, place it inside with a pre-filter, and pull tabs facing out. 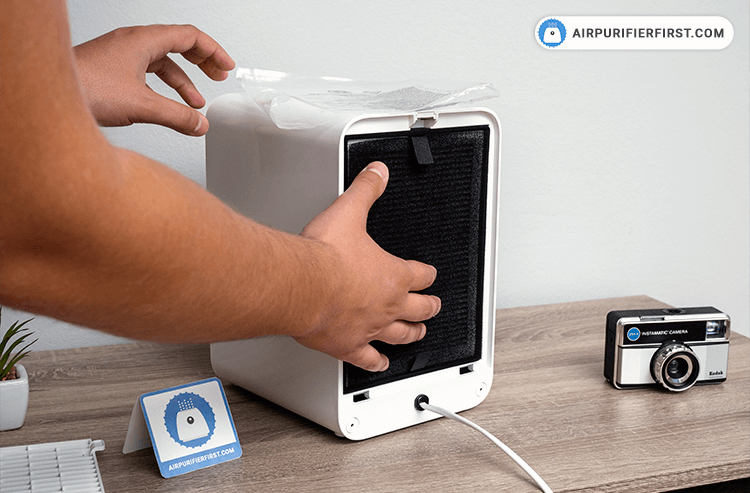 Put the rear cover back. 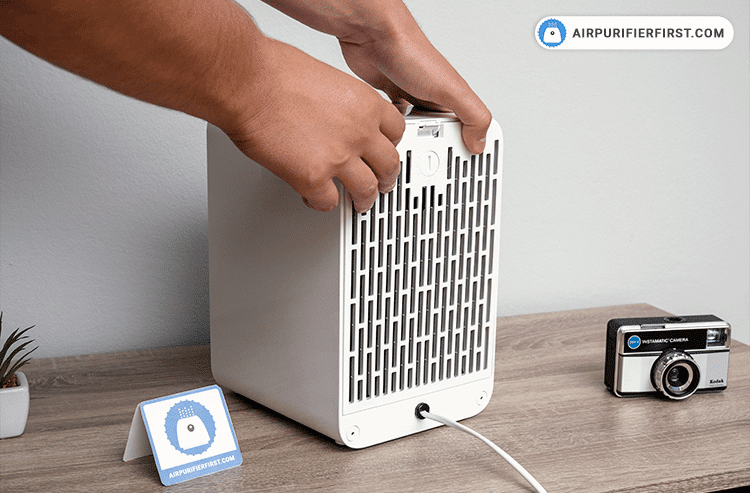 Use a filter reminder wheel if you want to track filter change. 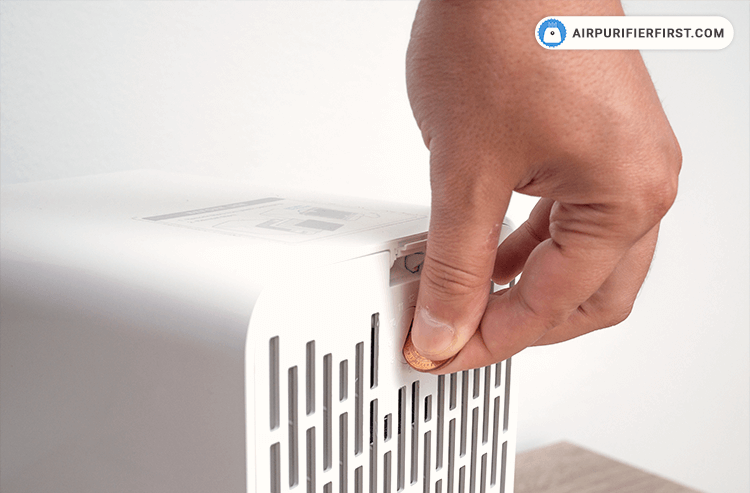 Once in a while, it is advisable to clean the pre-filter and inside of the air purifier. With regular cleaning, you can prolong filter life and improve air purifier efficiency.

You can use a reminder wheel in two ways. You can place it on a current month and then track how long the filter is used. Or you can set it in the future and replace the filter when you reach the desired month. The filter wheel contains numbers from 1 to 12, which represent months.

I have tested this device for noise at various speeds and in different scenarios. Levoit LV-H126 is not too loud at the first speed; however, on the third speed, it is two times louder than on the first. For many people, third-speed noise will represent a problem, and they may use lower speeds. But at lower speeds, efficiency is lower as well.

The third speed is the loudest, but at the same time, efficiency is the highest. I used a noise measuring tool that uses the dBA scale, so official results may be different from ours. Below you can find a table with all noise measuring results.

I have tested this device for performance in various rooms. I will show you only the significant results. All tests are done in real life, and I did not include any tests in the laboratory. In all tests, I used the third speed.

At first, I must say that I expected a much better performance. Sadly, the performance of this device is not too good. Previously mentioned, Levoit Core 300 is much better and is not costing much more than LV-H126. However, in case you want to remove pollution from a larger room, use LV-PUR131. LV-H126 is recommended for a room as large as 161 square feet. CFM is only 50, which is very low and not useful in larger rooms.

Levoit LV-H126 should be used in rooms that are smaller than 100 square feet for best results.

This room is a bit larger than the recommended room. LV-H126 did an excellent job in this room and is much better than Levoit Vista 200, which has identical technical performances. In only one hour, LV-H126 managed to drop AQI from 109 to 16, which is 85% air quality improvement.

The result is nothing special if we know that slightly expensive devices have much better results when used at a lower speed.

I can agree that Levoit LV-H126 is working great in larger rooms as well as in smaller rooms. However, I must also say that the overall result is slightly worse than in the similar air purifiers on the market. If you follow the Air Purifier First website and are subscribed to the YouTube channel, you probably noticed that.

The maximum device power is 35W, and because of that uses very little energy. If you let it run for 24h for a whole month on a third speed, it will cost you only 3$ if the electricity price is 0.12$/kWh. When on standby, it uses no energy. If we consider filter price and extra filers, we can agree that the operating costs of Levoit LV-H126 are small.

To revise, here are advantages and disadvantages of LV-H126:

Levoit LV-H126 is a simple air purifier with no extra features. All you do is turn it on and let it run. It does a decent job in rooms up to 100 square feet; it is also useful in-room up to 160 square feet. However, larger rooms are no good for this air purifier; simply, this air purifier does not have enough power. Usually, people use it near them by placing it on a desktop or working table.

This kind of placement allows you to breathe fresh air while the corners of the room are still filled with regular air. People all over the world like this product because of its simplicity.

Check The Latest Price On Amazon