On the one side, we have a Levoit Core 300 that is equipped with plenty of advanced options, uses a three-stage filtration, and is one of the best-selling models on the market. While, on the other side we have the Blueair 411, a minimalistic air purifier, with just one button for control.

The first difference I want to talk about is the room coverage, which is up to 219 sq. ft. for the Levoit Core 300, and up to 161 sq. ft. for the Blueair 411. These values are not noticeably different, and I’m sure you won’t feel much distinction if you put any of these air purifiers in a room of 200 sq. ft., for example.

I did various tests on these air purifiers, which I will show off and compare in the following article. In the end, I will decide which one is our absolute buying suggestion. So, keep reading!

Below is a complete list of important specifications and features included on the Blueair 411 and Core 300 air purifiers:

Before I dive any deeper, let’s check the features of each air purifier. As already stated, Blue Pure 411 is a minimalistic air purifier, while Core 300 has tons of features. The good news is that both air purifiers are ozone-free.

On the other hand, Levoit Core 300 has many options and has a control panel on the top, which has a lot of control buttons and LED indicators built-in.

While on sleep mode, Core 300 will reduce fan speed, and the device will minimize noise output. In return, you can sleep uninterrupted. Blueair 411 does not feature sleep mode, but its first fan speed is silent enough.

Children love to push buttons; with this feature, you can lock the touch panel. All the settings you set will be locked, and even if kids touch the panel, they will not change the settings. Blueair 411 does not have a child lock because there is nothing to be locked since it lacks buttons.

Blueair 411 fits better in your home thanks to personalized filters. Pre-filter is changeable, and you can choose from different colors: Dark Shadow, Diva BlueBuff, Yellow, Crystal Pink, or Lunar Rock.

Another advantage for Blueair 411 is that these personalized filters are washable, and you can wash them and make them clean and fresh whenever you want.

On the other hand, Levoit Core 300 has a pre-filter that is changed along with the primary filter, which means you can’t take it out and wash it. But, you can clean the pre-filter on the Core 300, and I advise doing that at least once per month.

When talking about filtration technology, I want to say that both devices use a 3-in-1 system.

Also, as I already mentioned, the pre-filter is washable in Blueair 411, while Core 300 does not feature that.

In Blueair 411, the pre-filter does not need replacement because you can wash it. Filters usually last between 6 to 8 months on both devices. For more details about how to replace filters on these air purifiers, check airpurifierfirst.com or YouTube Channel.

The noise level that these devices produce is not that much different. Since they make a similar noise level, this factor will not be relevant when choosing the best air purifier.

Core 300 is quieter on sleep mode than on other speeds. However, Blueair 411 on first speed will make identical noise as Core 300 on sleep mode. At the max speeds, they both are a bit louder, but also the most efficient.

You can check in the noise table more about the noise pollution these devices create.

I have tested both devices in a real-time environment to see, which is better at cleaning the air.

I tested them in 194 sq. ft. as well as 320 sq. ft. room. Both devices were excellent in both rooms, and the difference between them is not significant. However, while working longer, Core 300 did a slightly better job.

Check out the table below for more details about energy usage.

Although almost entirely different, both products will offer you excellent performance and much cleaner air. For people who are fans of minimalism or for people who prefer a large number of advanced features, this decision will be easy; you will not go wrong with whichever product you choose.

Blueair 411 offers personalized pre-filters to combine the design and color of the device with the environment. The design of the Core 300 is also superbly reflected, which is confirmed by the iF Design Award.

The Blueair 411 is slightly better in terms of both power consumption and noise pollution by the motor. Although I could easily declare this fight a draw, I still chose the Levoit Core 300 as the winner, because of the slightly better performance, better filtration, and because it has some fantastic features.

If you have any questions about these two air purifiers, please feel free to ask in the comment box below. 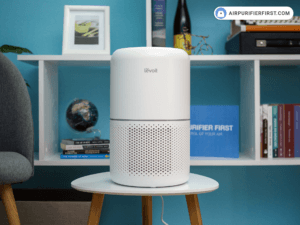 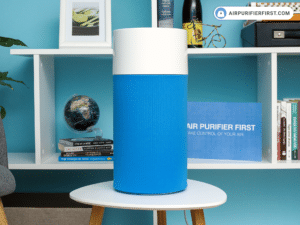