Lately, I have received a lot of queries about whether the Blueair 411 Auto is a better choice for buying than the Xiaomi Mi 3H air purifier.

They both are built of plastic, which is of okay quality. What I like about the Blueair is the changeable pre-filter available in five colors. Also, the Xiaomi is a huger device, so keep in mind that you will need more space in your room if you opt for it.

How did they perform on performance tests, which one uses better filters, and which one is an overall better buying option you will find out in the following article.

I put all these on paper and sum up all the most essential features of these two air purifiers, which you can find explained in detail in the following sections.

Blueair has improved its product lines with new and more innovative models in the past few years. The most significant difference in new models is in the air quality sensor, which is now the main part of models with the word “Auto” in their name. The air quality sensor on Blueair 411 Auto detects dust particles in real-time. Those readings are used to show the current air quality through the air quality indicator located on the front.

The Xiaomi Mi 3H has an air quality sensor as well. It detects dust particles in real-time and works with other features such as air quality indicator, PM2.5 indicator, and auto mode.

Overall, having an air quality sensor is a big step upward and a great feature that will make it much easier to use any of these devices daily.

I already said that the air quality sensors of these two air purifiers work in combination with an air quality indicator, which I explained above, and auto mode.

What is an auto mode? Basically, when the air purifier is switched on auto mode, it will change the fan speed (working mode) based on the current air quality, which it gets from the air quality sensor.

You can read these sensors’ data through the smart app or on a display located on the front of the device.

What I also like about these two air purifiers is that they have a filter reset indicator, which will notify you when it is time to replace the old filters.

On the Blueair 411 Auto, the filter reset indicator is located just above the control button and lights red when active. On Xiaomi, this indicator is shown on the display when turning the device on, and you can check the filter life at any time through the smart app.

Another option available only on Xiaomi is a smart app. Simply, Xiaomi Mi 3H can be connected to the Mi Home smart app, which is available for Android and iOS devices.

This is a handy feature that not only enables the remote control of the device but also unlocks many advanced options available only through the app.

Although Blueair 411 Auto is cylindrical, and the Xiaomi Mi 3h is rectangular, these two devices have almost identical airflow.

HEPASilent technology is essentially an ionizer that is always active and cannot be turned off. But, please keep in mind that the Blueair 411 Auto is CARB certified, which means it doesn’t produce an unallowed amount of ozone and is safe to use.

I want to point out that having a True HEPA filter is a huge benefit of the Xiaomi over the Blueair, mainly because the HEPA filter is the most important filtration stage, and the True HEPA is prooved as more efficient than standard HEPA filters.

What’s more, Xiaomi uses a pellet-based carbon filter, which is also much more efficient than the fibrous filter coated with carbon as it is on Blueair.

However, the Blueair has its trump card, a washable pre-filter, which is also available in five different colors.

How To Replace Filters?

Since all the filters on these two air purifiers, except the washable pre-filter on Blueair, aren’t washable, you have to change them occasionally.

The replacing filter process is straightforward, and I explained it in detail in individual reviews, which you can see on the links below.

The noise test is where Xiaomi showed why it is a top-notch air purifier. Due to the fact it has more fan speeds, and that has the ability to adjust the fan speed through the smart app manually, it was somehow expected that the Xiaomi will be quieter than the Blueair 411 Auto.

In addition to all mentioned, the Xiaomi motor works more pleasant, especially at the max speed, on which Blueair is a bit too loud.

The most interesting test in this comparison is the performance test, especially because Xiaomi covers much larger rooms than Blueair.

Because of different room coverage, I have tested them in a few different tests to get more credible results and to make a more precise comparison of their performance.

In addition to the tests that I will show below, I tested these two devices daily, and what I noticed and what I think is necessary to highlight is that Xiaomi has proven to be better at neutralizing bad odors.

In the first test, in a 320 sq. ft. room, these two devices have shown excellent results.

In addition to the previously mentioned tests, I tested the Blueair 411 Auto in a room size of 194 sq. ft., where for 60 minutes of work at max speed, it improved the air quality by about 94%, which is a remarkable result!

I tested Xiaomi Mi 3H in a room size of 560 sq. ft., in which this air purifier improved the air quality by about 90%, for 60 minutes, working at the max speed.

Overall, both, Blueair 411 Auto and Xiaomi Mi 3H have made fantastic results on performance tests and proven to be top air purifiers.

Probably, many of you expected that the Blueair 411 Auto is a much smaller power consumer, as it uses a motor of just 10W, which is almost four times less than the 38W, which is the power of the Xiaomi Mi 3H motor.

When we sum up the price of replacement filters and the power usage, and when we add to that the filter’s longevity, the Blueair 411 Auto is much cheaper for maintenance annually than the Xiaomi Mi 3H.

I think from the very beginning, this battle was evident.

Although the Blueair 411 Auto is much more affordable to maintain, and even though it performed pretty well in performance tests, I choose the Xiaomi Mi 3H as a better buying option and the winner in this battle.

Xiaomi Mi 3H has a much larger filter, uses a True HEPA filter, has a pellet-based carbon filter, has plenty of advanced options, and also made outstanding results in performance tests.

In essence, although the Xiaomi Mi 3H is a better choice to buy, you won’t make a mistake even if you opt for a Blueair 411 Auto. Personally, I would recommend Blueair for smaller rooms, in which it could fit better and be more beneficial than Xiaomi.

If you have any questions, do not hesitate to ask them in the comments box below. 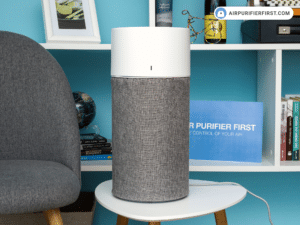 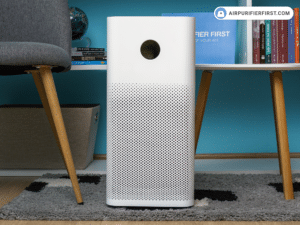