Today’s comparison will be all about keeping it within the family. Here we have two air purifiers made by Levoit. One model is Vital 100, and the other one is Core 300. Both are coming from a company dedicated to making your life healthier, which made their products amongst the best and top-selling in worldwide markets.

I assure you that this will be an unusual and quite demanding comparison, not because of their performances but due to the fact that these are the ‘’old school’’ air purifiers in the Levoit family.

Levoit Vital 100 and Levoit Core 300 are very popular amongst the consumer population and it’s all thanks to their proven efficiency and reliability. They are a true example of how a product can be effective even without all the fuss about having multiple advanced features, connections to the smart app, etc.

Aside from their shape difference, these products can be found both in white color, while black is alternative for Core 300 and dark grey for Vital 100. Some might say ‘’oh, it’s that tomato pronunciation’’, and maybe you’re right, but let’s focus on what really matters. Follow me.

As previously mentioned, you can’t observe these air purifiers through the search loop of ‘’nowadays-must-have’’ options. Leave it to their successors. Things like Air Quality Sensor or a Smart App are not to be found at both Vital 100 or Core 300.

However, don’t dismiss these air purifiers just like that, because I assure you that many users still find satisfaction in the simplicity and effectiveness that these products offer.

The Filter Reset Indicator is one of the common options for both Levoit Vital 100 and Levoit Core 300. It is one of those very useful options that will give you a hand with filter management. Looking like a button on a control panel, it will light up in red color if your air purifier’s filter needs to be replaced.

This means you won’t have to check up on your air purifier all the time. However, don’t get too lazy. It would be recommended if you could take a look at the filter once in a while. If the filter is messy and dirty, don’t hesitate to replace it even before its expiration time. After all, it’s what adds that healthy prefix to your lifestyle, am I right?

Another useful and common feature for Vital 100 and Core 300 is the Timer. In case you are the forgettable type, use this feature, and you won’t have that ‘’did I or did I not turn it OFF’’ panic attack. With Levoit Vital 100, you can set up the time to 2h, 4h, or 8h. On the other hand, Levoit Core 300 can offer a 6h setting, in addition to Vital’s options.

As always, sharing is caring. That is why the Display OFF option is what both air purifiers have. Use it to dim all the other indicators if you don’t want to be distracted for any reason. If you are planning to set the device in your bedroom area, for example, this will be a quite useful feature.

Here comes the crossroad. The child zone. Levoit Vital 100 does not come with this option that is a matter of standard to most other home appliances. At the same time, Levoit Core 300 has a Child Lock feature, and you can use it in the simplest way possible. Just hold your finger on the Child Lock button for a few seconds, and it will automatically lock all the other buttons. The same instruction refers to when you want to unlock the device.

Having this feature as an option is extremely popular and very handy in family households. You can’t get any better than protecting both your youngest ones and your favorite appliances.

Given the fact that Levoit Vital 100 and Levoit Core 300 are profoundly different in construction terms, their airflow also differs. For the Vital 100 and its rectangular shape, it is much easier to process the air that comes in. The suction holes are positioned on the bottom side of the appliance. The air goes through the filtration process and releases on the upper side.

Due to its cylindrical shape, Core 300 has suction holes located at 360 degrees, which means all over the bottom part of the appliance. Once the air goes through the filters, it spreads out evenly through the upper side.

As in many other cases, a Levoit company has predefined warranty coverage for all of its products. You will be entitled to a 2-year warranty in case you buy either Vital 100 or Core 300.

However, to be fully covered by this warranty, you will need to sign up to Levoit’s website once you buy your chosen air purifier.

The filtration process in Levoit Vital 100 and Levoit Core 300 is almost identical. In both ways, it contains three stages of filtration: a pre-filter, a carbon, and a True HEPA filter. Why almost, you may wonder? Well, due to their order.

The first stage belongs to the pre-filter in both cases. Still, with a slight difference. In the case of Vital 100, you can easily detach the pre-filter, which is usually hooked on carbon and HEPA filter, and wash it every once in a while. This is the part where a rectangular shape comes in handy because it allows you better maintenance and control over your air purifier.

On the other hand, due to its cylindrical and hollow shape, Core 300 has its pre-filter inseparable from the two other filters but still easy to clean, with a little help from your vacuum cleaner or a simple cloth.

The carbon filter in both air purifiers is consisted out of carbon pellets, which makes both devices a strong companion in odor and gas neutralization. The only difference is that this filter is positioned as the second stage in Vital 100 and the third one in the Core 300.

The third stage of filtration, or the second in Core 300, belongs to the ‘’first among equals’’, a True HEPA filter.

To spice it up a little bit, Levoit Core 300 allows you to purchase custom-made replacement filters, which means they are designed for special purposes and circumstances.

How To Replace Filter On Both These Devices?

As I’ve mentioned in the previous section, one air purifier comes with a washable pre-filter while the other doesn’t. In both ways, in terms of proper maintenance, the filters are supposed to last between 6-8 months. In most cases, you’ll have to replace them twice a year.

The replacement process is as easy as it gets. Just pay attention to the Filter Reset Indicator, and you should have no problems whatsoever. If your Vital 100, or Core 300 air purifier, was exposed to overly polluted air conditions, be sure to check up on whether it needs a filter replacement sooner than expected.

I recommend, at least, monthly filter cleaning if you want your air to be clean and safe.

If you’re expecting both Levoit’s air purifiers to conduct in the same, then you wouldn’t be wrong. Having three-speed levels is in common to both Levoit Vital 100 and Levoit Core 300, with the Sleep Mode added to other Core 300’s features.

Another impressive fact that runs in favor of the Core 300 is the QuietKEAP Technology, which makes it extra quiet at a minimum speed level. More than Vital 100.

There are no awkward or unpleasant sounds, no buzzing or cracking, and the motors are working smoothly. A bit heavy, but tolerable sound while at maximum speed level. After all, the better airflow, the cleaner the air gets.

Testing an air purifiers’ performance has never been a boring process, at least not to me. After all, it is the central purpose of each air purifier. Testing these Levoit’s products has been an even more curious process. I’ve written before on the room space assigned to each device. Now, let’s talk about the real deal.

Even though Levoit Vital 100 is designed for a larger space than Levoit Core 300, it wasn’t enough to create an advantage against its opponent.

I decided to put them to the test in equal room sizes to be convinced of their true performances.

Both air purifiers have been tested for 60 minutes while working at top speed, and here are the results.

Considering that 194 sq. ft. was an adequate room size for the first test, both air purifiers were terrific. Levoit Vital 100 managed to clean the air by 95%, while Levoit Core 300 was also good with its 93%.

With almost doubled room size, 320 sq. ft. was even more surprising to me. Both Vital 100 and Core 300 showed their grace by improving the air quality by 92%.

However, another important detail is that the Levoit Core 300 is Energy Star verified. With that in mind and the fact that in annual terms, Core 300 can save more of your electricity and your money, it turns out that it is more affordable than Levoit Vital 100.

We have come to the final part, and I am sure you have made your own conclusions. So, let’s see if our choices match.

After all the comparisons done in the past, I find this one the most indecisive. Up until the last minute. Like in many other life situations, it’s the shades that set the case to rest.

Even though Levoit Core 300 had a slightly lower performance than its opponent, all the other features and small victories turned him into a winner. The fact that it’s a bit more silent and easier to maintain, not to mention the overall lower expense, can’t be neglected.

Surely, I don’t need to remind you that, choosing Levoit Vital 100 would be an equally good decision, in terms of high expectations.

Now, curious as always, I can’t wait to hear more from you. I wonder what choice would you make and why? 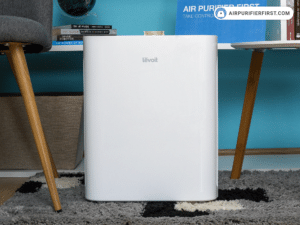