Levoit Core 400S and Coway AP-1512HH are medium-sized air purifiers, very reliable, and with some exciting features. Since Levoit released the Core 400S model, I have received many inquiries about whether this air purifier is a better buying option than the Coway AP-1512HH.

Honestly, in my opinion, Levoit looks much more modern, has some advanced options that aren’t included in Coway, and is slightly more affordable to use. But, could a modern look, a better price, and cheaper maintenance be enough for Levoit to beat Coway, or does it take a little more severe trump card to win? Read the article thoroughly and find out.

Regarding room coverage, I would like to say that Levoit covers rooms up to 403 sq. ft., while Coway covers spaces up to 361 sq. ft. Almost identical room coverage, outstanding performance, and many advanced options are just some of the features common to these two air purifiers.

Keep reading and find out what makes the Levoit Core 400S better than Coway, whether the innovations on this model can help it cope with an already proven air purifier such as Coway, and of course, which air purifier I’m choosing as the best buy.

A filter reset indicator is also built-in on both. However, some options adorn only one of the devices, which makes that device special, and I will explain these in more detail below.

When speaking of controls, I would like to emphasize that both air purifiers have a control panel located on the top.

I like the layout of the buttons on both devices, and in my opinion, they are straightforward to use. When it comes to controls in general, I’m giving a slight advantage to Levoit because it can connect to a smart app and be controlled remotely.

Monitoring current air quality is an option mutual for both air purifiers. Levoit and Coway use an air quality sensor that detects dust particles in real-time.

The Levoit Core 400S displays real-time air quality on the control panel through an indicator that illuminates a different color depending on the current air quality, on display as a PM2.5 value, and via a smart app. It uses an AirSight Plus laser dust sensor located on the back of the device, which has a built-in motor, which means it can work even when the device is turned off.

I like that both devices have the ability to adjust the sensitivity of the air quality sensor and that the sensors in both work even when the air purifier is off.

The air quality sensor works in combination with many options. For example, these two air purifiers have an auto mode that will automatically switch fan speed based on the current air quality in the room.

Auto mode is a handy option that allows you to leave the device running automatically without setting it up additionally.

The Levoit Core 400S has the ability to connect to the VeSync app available for Android and iOS devices. Coway does not have such a possibility.

All in all, connecting to a smart app is a great feature, which definitely gives Levoit a slight advantage in this comparison.

A timer is also an exciting option that adorns both devices. Basically, the timer is used to set a time for which the air purifier will turn off.

Levoit and Coway use a filter reset indicator located on the control panel. At the same time, Levoit additionally has a slightly more detailed presentation of filter wear available through the smart app.

Because of the slightly different construction, Levoit is cylindrical, Coway is rectangular, the airflow on these two air purifies is somewhat different.

Levoit draws air through openings in the lower half, on all sides. Then, the filtered air exits at the top.

Coway, on the other hand, draws air in the front, through openings in the sides, bottom, and through small gaps located on the front lid. The air is then filtered and exits through the grilles at the top.

Levoit gives a 2-year warranty for the Core 400S, but you must register the device on the Levoit website soon after purchase to activate your warranty.

Coway is a little more generous, so it gives a 3-year warranty for the AP-1512HH.

When it comes to filtration technology, I would like to say that these two air purifiers use 3-stage filtration, plus an ionizer, which is an additional filtration stage on Coway.

Fortunately, both devices are CARB certified, which means that they do not produce unallowed amounts of ozone.

The filters are of different shapes. With Coway, it is rectangular, while with Levoit, it is cylindrical. I really fancy the fact that both devices use a True HEPA filter, and I would like to commend the pellet-based carbon filter at Levoit, which is much more effective than the fibrous carbon filter at Coway.

All in all, these two air purifiers use very high-quality filters, which have been proven in performance tests that you can see if you scroll down a bit.

The Levoit Core 400S and Coway AP-1512HH use non-washable filters, except the pre-filter on Coway, which means you need to change them from time to time. I would like to suggest cleaning the pre-filter on both air purifiers at least once a month. In that way, you will prolong the life of the True HEPA filters and improve the air purifier’s efficiency.

Fortunately, these two devices have a filter reset indicator that will notify you when it’s time to replace the filter.

The replacement process is straightforward, and if you don’t feel soo comfortable doing it, I explained in detail how to change the filters on these two air purifiers in individual reviews. You can find the explanations on the links below.

Whenever I talk about noise, I try to consider as many parameters as possible, and one of the essential parameters is the number of speeds the device has. In this case, Levoit has a slight advantage because it has 5 fan speeds which is much more compared to the 3 speeds that Coway has.

I really like that the Levoit Core 400S has a sleep mode, which is extremely quiet and helps you use the device in the bedroom. I’d also like if Coway had a sleep mode option, but that’s not a big drawback, as the Coway is as loud on first fan speed almost as much as Levoit on sleep mode.

All in all, I would declare Levoit to be a slightly quieter air purifier, primarily because it has more fan speeds, it is generally quieter at all speeds, and its motor works somehow more smoothly.

Levoit Core 400S and Coway AP-1512HH cover rooms of about the same sizes. Levoit covers rooms up to 403 sq. ft., while Coway covers rooms up to 361 sq. ft. I have tested both devices in everyday situations in my house, and I also performed a few specialized tests, of which results I will present below.

During everyday testings in the rooms where I stay most of the day, I noticed that Levoit is more effective in removing bad odors, especially cooking and cigarette smoke.

All in all, I am delighted with the performance of these two air purifiers, which is why they are my absolute recommendation.

In the test in a room of 320 sq. ft., the air purifiers showed excellent results. In just 60 minutes of operation at max speed, the Levoit Core 400S improved air quality by about 96%, the same as the Coway AP-1512HH.

I am delighted with the results performed, which only further confirm the reliability and efficiency of these devices.

This means that if you left these two air purifiers running at max speed, 24h a day, and so on for a month, your electricity bill would be increased by about $3 in the case of Levoit, and about $6 in the case of Coway.

To sum up, these are two great air purifiers, and I’m sure whichever you decide to buy, you won’t go wrong. However, as the goal of my comparisons is always to choose and recommend a winner, I did it.

In my opinion, the winner in this comparison, i.e., the air purifier I would rather choose for myself, is the Levoit Core 400S. I chose it because it can be controlled by smart options, has cheaper replacement filters, has slightly better odor neutralization, and is much cheaper for maintenance on an annual basis.

If you have any additional questions regarding these two products, please don’t hesitate to leave a comment in the comment box below. 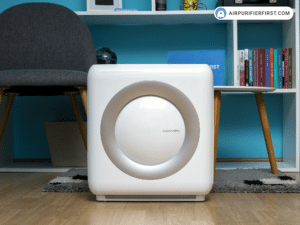